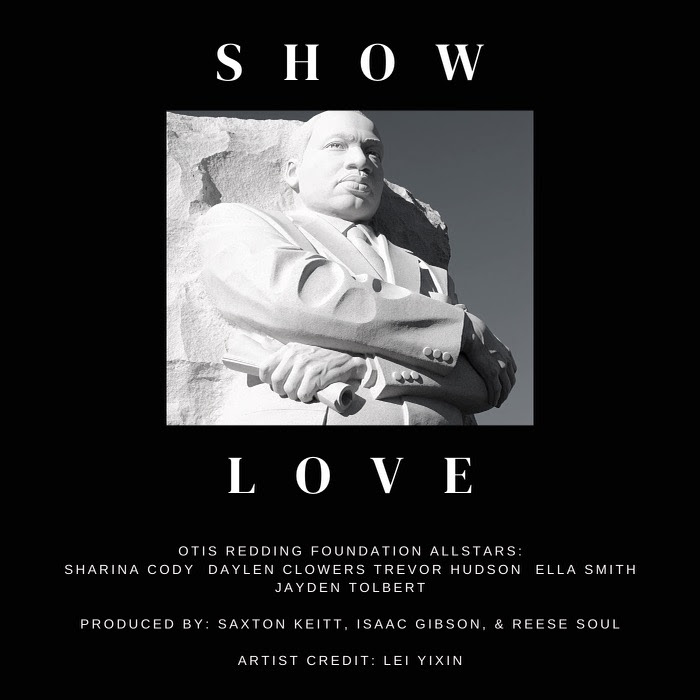 Posted on January 19, 2023 by Gregory Gay
In honor of Dr. Martin Luther King’s birthday, the Otis Redding Foundation is releasing a new song, “Show Love,” written and produced by students ages 12-18, who attended the Otis Music Camp at the height of the pandemic in 2020.  The song is based on a sermon “Loving Your Enemies” which Dr. King delivered at Dexter Baptist Church in Montgomery, AL on November 17, 1957, and includes a live excerpt of the sermon. Dexter Baptist Church is a designated a historic landmark and boasts significant African American history since its opening in 1887. Much of Montgomery’s early civil rights activity, most famously the 1956 Bus Boycott, was directed by Dr. King from his office in the lower level of the church.
“We are always proud of the students who participate in the music camps that the Otis Redding Foundation offers each year,” stated Karla Redding-Andrews, Vice-President, Executive Director.”   “This song was recorded during the 2020 pandemic in the virtual Otis Music Camp, OMC 2.0, using Soundtrap by Spotify Digital audio workstation.  It represents the love and respect these young people have for Dr. King during the height of the “pandemic,” a word they had never heard before.”
The young people who wrote and performed “Show Love” are Sharina Cody, Daylen Clowers, Trevor Hudson, Ella Smith, Jayden Tolbert, and produced by Saxton Keitt, Isaac Gibson and Reese Soul.
“My husband believed in giving young people an opportunity to grow through music.  Our camps inspire them to write, perform, produce, and play instruments,” stated Zelma Redding, Founder and President.  “We are excited about the new Otis Redding Center for the Arts which broke ground in Macon in September 2022.  We will be able to expand our programs and allow more young people to grow their musical talents.