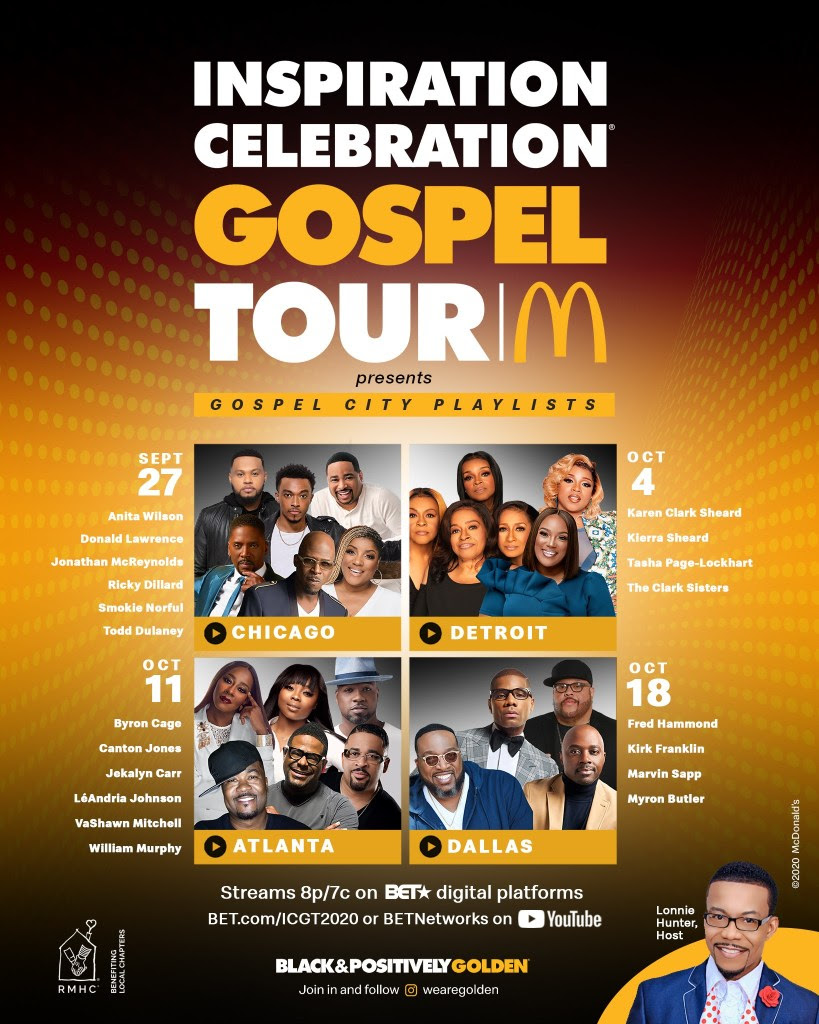 This year’s theme will come to life through the virtual showcase of the rich gospel legacies of Atlanta, Chicago, Dallas and Detroit, reviving the decades-long debate about which major U.S. city produces the greatest gospel music. Legendary and award-winning gospel music artists Kirk Franklin, Marvin Sapp, Fred Hammond, The Clark Sisters, Kierra Sheard, Smokie Norful, William Murphy, and many others, will sing fan favorites, while encouraging viewers to engage in friendly online banter about which city has the greatest gospel hits and artists.

“I’m excited to join this diverse lineup of talented artists who, like me, are proud to carry on the longstanding traditions of gospel music,” said Kirk Franklin, an award-winning gospel music icon, choir director, singer, songwriter and author. “McDonald’s is doing amazing work by hosting this top-notch tour for the community through its Black & Positively Golden movement. My fellow artists and I are hoping fans everywhere will be inspired to continue pressing forward during these trying times and be encouraged to give back to families in need through Ronald McDonald House Charities.”

Franklin will be part of the tour for the third time, while renowned singer, songwriter and producer Donald Lawrence will return as tour co-producer and music supervisor. Multiple-award winning artist and syndicated radio host Lonnie Hunter will resume hosting duties.

The full 2020 artist lineup is as follows:

“Every year, our Inspiration Celebration Gospel Tour is one of the most highly-anticipated community events. Recognizing its importance and rich legacy, we are excited to bring the tour to life virtually, which is also allowing us to offer it to a larger audience at a time when these inspiring messages are needed most,” said McDonald’s Owner/Operator Harry Smith. “As we continue navigating these difficult times, we look forward to bringing people together from across the country through this safe and uplifting virtual concert series.”

In addition to delivering inspiring music to fans nationwide, the concert series will continue to raise funds to support families served by RMHC Chapters in each of the four cities. People are encouraged to visit http://www.rmhc.org/ICGT2020 now through October 18 to donate to the Charity’s local Chapters.

Another first, the tour will feature a virtual pre-show red carpet lounge hosted by social media comedian, Not Karlton Banks. Fans are invited to view the virtual red carpet lounge via Karlton’s Instagram Live approximately 20 minutes prior to each concert to hear from their favorite performers.

This signature concert series will represent gospel music playlists from each highlighted city on the following days: