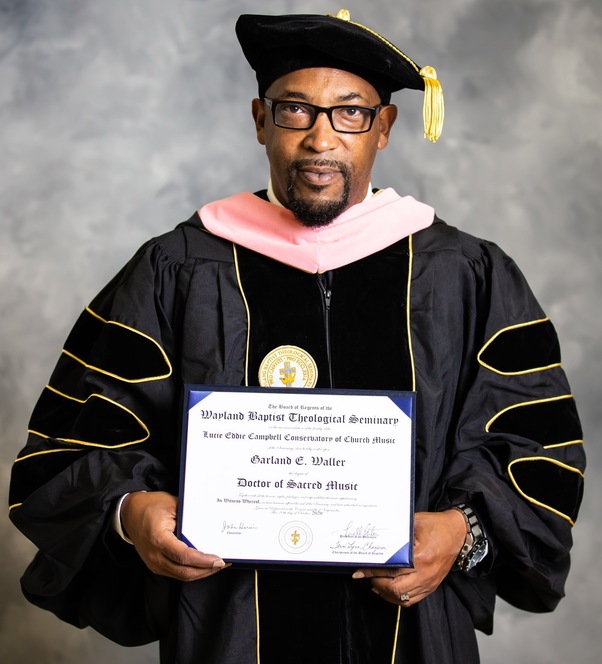 Garland Waller, better known as “Miche,” is a well-known name throughout the Gospel Music industry. He is widely known as the talented musician and producer for Pastor John P. Kee for 25 years but, Miche holds his own and is revered as a skilled musician, composer, arranger, and highly sought after producer for many award-winning artists.
For his many years of producing and writing award-winning sacred music, his genius aptitude as a musician, and for his leadership as an executive in Gospel music, Miche has been awarded an Honorary Doctor of Sacred Music Degree from Wayland Baptist Theological Seminary.

“I never dreamed I would be in this position,” Miche says. “I wish that my grandfather and mother were still alive to see this, and to know that I kept my promise to only play, produce, and write God’s music.”

He continues, “Receiving my honorary doctorate has been another blessing in my life. It has confirmed that I am walking in my purpose, working in my calling, and the work that I have done has not been in vain. I pray that I can continue to walk in this journey and can further be a mentor to other young people who have the same calling.”
Miche began his musical journey at his grandfather’s church National Temple Baptist Church in Philadelphia. Miche continued to fine-tune his gift at the Philadelphia College of Performing Arts. Though he is an accomplished musician in classical, jazz, and contemporary music, Miche always felt at home playing and arranging Gospel music. Several of his early works with the Gospel Music Workshop of America Choir and the VIP Mass Choir are now considered classics.

In 1990 Miche became the pianist for Pastor John P. Kee and his church New Life Fellowship Church in Charlotte, NC. Miche was elevated to Music Director and produced most songs and musical arrangements for Pastor Kee’s album from NEVER SHALL FORGET (1994) to LEVEL NEXT (2015). Throughout his 25-year tenure with Pastor Kee, Miche also had the opportunity to work with the world’s greatest storyteller Evangelist Dorothy Norwood and The Wilmington Chester Mass Choir.

Miche returned to his hometown of Philadelphia in 2014 to serve as the musical director of Enon Tabernacle Baptist Church, where Rev. Alyn E. Waller is the pastor. In collaboration with Pastor Waller, who is Miche’s cousin, they formed the record label Enon Music Group (EMG). Miche serves as Vice President of the thriving record label.
With the mission of preserving and celebrating the rich sound of music for the church, Miche and EMG delivered the Billboard-charting and Stellar nominated album THE EXPERIENCE by The Enon Tabernacle Mass Choir. Also under Miche’s leadership, EMG has released Stellar nominated albums by Zak Williams & 1/Akord and Fresh Anointing. EMG is one of Gospel music’s fastest-growing record labels with an artist roster and distributed artists that include San Franklin, The Kergyma Community Choir, April Hall, DRK 2 LGHT, Derrick McDuffey and Kingdom Sound, Jemila Richardson, Robert Copeland, De’Leon Carr, Chico Robinson and God’s Chosen and many more psalmists, ensembles and choirs.

In addition to his Honorary Doctorate from Wayland Baptist Theological Seminary, Miche is humbled by and treasures his 2018 induction into the Philadelphia Gospel Music Hall of Fame and his listing in Who’s Who in America. He is a celebrated musician whose primary source of inspiration comes through prayer and his connection to God. His joy is to continue using his talents to promote songwriting, music development, production, and training and to develop creative messages to spread the word of Jesus Christ.