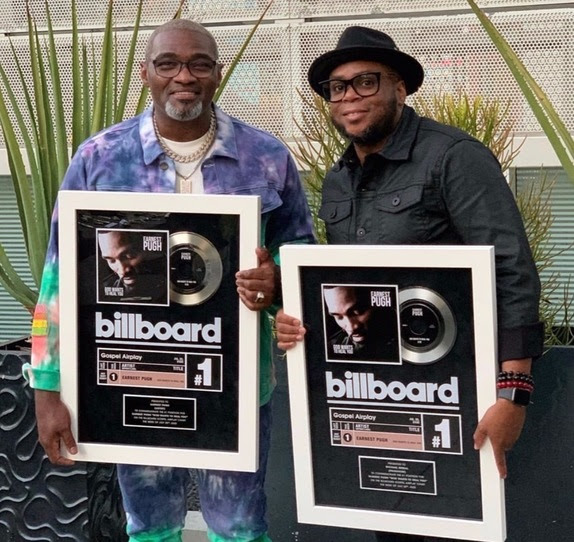 The gentleman of Gospel, Earnest Pugh was recently honored in Los Angeles, CA by The Burke Management Firm for reaching #1 on the Radio AirPlay Chart for his smash hit single “God Wants To Heal You.” This makes Pugh’s third #1 Billboard single.

“Although the song was recorded over 12 years ago, its timeless relevance continues to resonate in the hearts and minds of listeners across the globe,” says Vanzil Burke, Pugh’s Business Manager.

Producer Michael Bereal was also honored along with Pugh. Bereal recalls the impact that the song made on the audience the night it was performed in Washington, DC during the RAIN ON US Live recording. “We closed out the recording with that song and the people refused to leave the room. The cloud of glory lingered in that room beyond the benediction.”

Keith Williams, Executive Producer and Vocal Director of the RAIN ON US project also remembers, “The song swept through the room like a mighty rushing wind on that night and we were confident that the song’s reach would administer healing to the nations for years to come.”

The song was written by Apostle Kevin Davidson, one of Pugh’s close friends and mentors from his home town of Memphis, TN. Pugh attributes the success of the song at radio to Blacksmoke Music CEO, Kerry Douglas. According to Pugh, “Kerry’s drive, experience, and knowledge in radio promotions remain unmatched. He gets the job done.”

Pugh plans to release a follow-up single “Thank You So Much” in just a few weeks preface to the Thanksgiving holiday season.

“As a Thanksgiving baby, the essence of who I am is thanksgiving!” Pugh shares. “While most people esteem Christmas as their favorite holiday, mine is clearly Thanksgiving! I believe the new single will be the Thanksgiving Anthem of 2020.”

“God Wants To Heal You” and “Thank You So Much” can both be found on Pugh’s latest CD THE OUTPOUR EXPERIENCE which was released in May and is available on all digital music outlets.