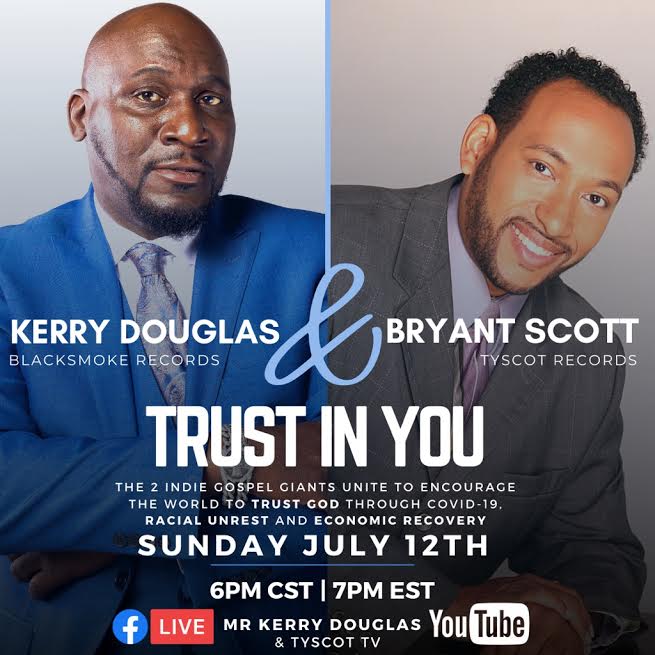 The two biggest independent gospel recording labels in the world – Blacksmoke Music Worldwide and Tyscot Records – with over 75 years of shared history – are coming together for the first time on Sunday, July 12 @ 7 PM ET/ 6 PM CT for a special YouTube live event of candid conversation about the ups and many downs of being an indie, classic music, and dynamic performances entitled, Trust in You.

Instead of a Versus battle, this will be a celebration of the labels’ rich music catalogues. There will be tracks like Blacksmoke’s “I Trust You” by the Grammy® Award nominated group, James Fortune & FIYA, which spent 29 weeks at No. 1 on Billboard’s Gospel Airplay chart. Or like Tyscot’s “Trust in You” by Grammy® Award nominated act, Anthony Brown & group therAPy, which peaked at No. 3 and spent 53 weeks – an entire year and a week – on the Billboard Gospel Airplay chart.

“This is a history making event,” says Douglas. ”#BlackMusicMatters. It really does. Historically, Gospel is the foundation for so much music. We’re going to share music past and present. The 2 largest black-owned gospel record labels in the world are coming together as one to share the secrets to our mutual successes. We’re going to show everybody how we did it. How we went from independents in the cassette era to making major moves in the music industry in the digital era.”

Between the two companies, there are hundreds of millions of streams, a score of number one hits, a dozen A-List gospel stars and they are still grinding. “We didn’t want to do a battle,” says Scott. “There’s so much unrest in the country because of racial tensions and the coronavirus, so we didn’t want to create another thing to create division. We wanted to show unity in the gospel music industry.”